The Villages on the Shores of Loch Lomond

We have provided brief notes on such villages below, but if you are interested in this topic or looking for help with capstone project, are preparing for a holiday or a trip - the reason may be different, but it will not hurt you to read information about The Villages on Loch Lomond.

The villages are listed starting with Inverarnan just beyond the north end of the loch on the west shore, and then in order travelling in an anti-clockwise direction round the loch.

Inverarnan is not truly on Loch Lomond but is still worth a visit. Probably the most noteable thing about Inverarnan is 'The Drover's Inn' which was used by the Highland drovers who drove their cattle down the west shore of Loch Lomond to the markets. Looking over Loch Lomond you get a  view of a magnificent waterfall on the high slopes over the loch. The west highland way passes up the shore on the opposite side but no bridge was ever provided due to a dispute with the Colquhounes of Luss.  The piers of a bridge, started but never completed,  still remain just north of the hotel. The only way over to the west highland way is by ferry from the pier at the marina or by the bridge 4 miles north of Ardlui. 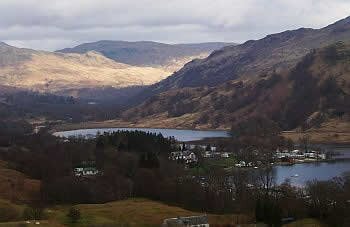 Ardlui is situated at the Northern most point of Loch Lomond and is near to some of the best walking routes around the Loch, with a ferry to take you across the Loch to join up with the West Highland Way. If you are a serious and skilled walker/climber then there is a route to the top of Ben Vorlich next to the Railway Station. If you are maybe less experienced and Ben Vorlich is your choice there is another route starting from Loch Sloy Power Station a few miles south which is less demanding. Ardlui is by no means a large village if you can even call it a village. It does however have all the amenities of a large village that any visitor may expect to find. There is a Railway Station, which is of course part of the West Highland Line. There is now a Bird Centre at Ardlui situated at the North end of the Station that will cater for those with the most exotic of tastes when it comes to our feathered friends. If you are walking from Ardlui and following the road take care as there are no footpaths for walkers in either direction. North along the banks of the River Falloch you will come to a bridge that will let you again join the West Highland way. And southwards from Ardlui will take you to Pulpit rock worth a visit and some questions locally about the name.

The east fork of the A82 from Tarbet leads up the lochside via some nasty bends and on to Inveruglas where at the car park you can see some wonderful views down the loch and over the now narrow Loch Lomond to Inversnaid, birthplace of Scotlands own Rob Roy MacGregor.
At the lochside car park a seasonal ferry will take you over the loch to Inversnaid and Rob Roy's cave. You can also revel in the not so beautiful though spectacular sight of the parallel pipes which carry the water for three miles from Loch Sloy in the mountains before descending to the power station by the road.
Loch Sloy was once the gathering place of the Clan MacFarlane and 'Loch Sloy' was their war-cry.

In the bay is Inveruglas island upon which lie the remains of a castle, once the stronghold of the MacFarlanes, this is one of the many castles in Scotland which Cromwell burned to the ground.

Ven Vane can be climbed from here and the best access to is obtained about 700 yards south of the car park.

Tarbet is on the west shore of Loch Lomond a short distance from Arrochar. Like Arrochar this is a popular stop on the West Highland Railway for walkers, cyclists and climbers alike. The views here are stunning and is probably one of the reasons why there is a very large hotel on the main street.

The railway station at Tarbet serves both Arrochar and Tarbet, and is on the Glasgow Oban or Fort William routes. The village is also on the main bus routes from Glasgow to Oban or Fort William. This small hamlet also has Loch cruises run by Cruise Loch Lomond Ltd with cruises leaving from Tarbet pier daily. 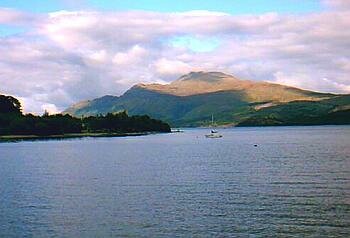 Luss will be recognised by anyone who watched the TV Soap series "Take the High Road".

Just off the loop road at Luss there is a car park from whence you can wander through the lovely old village with its old church, have a cup of tea, and take a sail from the pier at Loch Lomond side.

Many of the cottages in Luss were originally erected for the use of workers in the 18th and 19th centuy cotton mill and slate quarries. The homes have been fully restored and Luss is designated a "Conservation Village".

Some 3½miles upstream on the Water of Luss are the ruins of a village. This was once a weaving community - now long gone.

Several stories exist about the derivation of the name 'Luss'. One such story related to that of the Baroness MacAuslin, who died in France whilst her husband was fighting at the siege of Tournay. Her body was brought back to Luss covered with flowers which included the fleur-de luce.

Luss has probably existed for a thousand years, possibly more. To the south of the pier a path leads to the Church of St McKessog which was built to commemorate the drowning of Sir James Colquhoun and four others who drowned in lomond in 1873.
The Vikink Haekon of Norway passed through Luss in 1263 after the Vikings came over from Arrochar via Tarbet to plunder the settlements on the Islands and Loch-side. An 11th Century Viking Hog-backed gravestone bears testimony to this - at least one Viking stayed here, willingly or otherwise. The 6th Century Saint MacKessog or Kessog brought Christianity from Ireland and founded a monastery on Inchtavannach (the island) in the 6th Century.

The best view of the south part of Loch Lomond can be had from the pier and Ben Lomond is seen to its best advantage on the opposite side of the loch to the northeast. Looking further south to Balmaha, Conic Hill forms part of the Highland Boundary fault which is also responsible for the chain of islands which traverse the loch there.

Balloch is busy, has lots of interest and things to do, although it is perhaps not the most beautiful place on the shores of Loch Lomond!  Here the river Leven exits the loch  and you will find the largest of the many marinas as well as watersports, trips on motor launches, Balloch Castle  and the inevitable 'Chippies'.
The railway line from Glasgow terminates here although most trippers now come by road. You'll even find the old Loch Lomond paddle steamer 'Maid of the Loch' tied up at Balloch pier where it has served as a floating restaurant for some years. 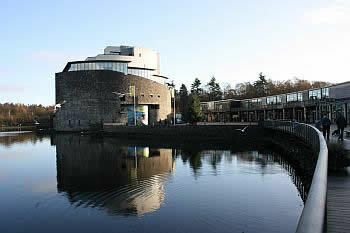 Near to Balloch is Alexandria - not very scenic, but the home of 'Antartex Clothing' and a selection of great discount stores at ' Loch Lomond Factory Outlets' which now occupies the former Argyle Motor Co. factory. A motor museum and some classic cars provide interest for dad and the kids whilst mum visits the stores.

Loch Lomond Shores complex provides a Tourist Information facility, a shopping area and the Drumkinnon Tower which now serves as an aquarium.

Balloch Castle country park which contains the 1808 castle built for  Buchanan of Ardoch and also the small remains of the 13c Balloch castle is owned by w. Dumbarton Council and is open to the public.

Balmaha is I suppose the eastern pleasure boating centre of Loch Lomond nestling in a sheltered bay, permanently populated by pretty pleasure craft. Quiet in winter, impossible to park in summer, it's a popular stop for walkers and climbers on their way to the West Highland Way or Ben Lomond.

A popular walk along the Loch Lomond shores leads eventually to the old steamer pier overlooked by in interesting outcrop of red sandstone conglomerate or 'pudding stone'. The island seen offshore and reached by ferry is 'Inchcailloch' - once the home of St Kentigerna, the mother of St Fillan. The island also boasts an ancient burial ground of the MacGregor Clan. 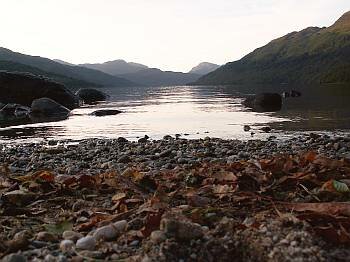 Rowerdennan is a very small but picturesque village lying at the foot of Ben Lomond with some of the most spectacular views northwards on the east side of Loch Lomond and is the farthest north you can take a vehicle. The trip is worth every mile traveled .
The car park at the end of the Village has a road leading to the Youth Hostel.

Rowardennan boasts a lovely beach with grainy sand - a blessing as the sand stays where it is in the wind!
The small steamer pier here is still used by pleasure boats taking visitors on Loch Lomond and round some of the islands. The West Highland way also starts in earnest here and continues all the way up the loch via Inversnaid and ultimately to Fort William in the west of Scotland via Rannoch Moor.
Most walkers intending to tackle Ben Lomond start their attempt here and ascend by the 'tourist route' which starts at the car park, climbs up through the wooded lower slopes before following the long shoulder northwards to the peak.
The road stops here at Rowardennan and unless tackling the West Highland Way or Ben Lomond , the only way out is to re-trace your steps.

Inversnaid is the most northerly village on the loch and boasts a large hotel and a steamboat pier. There is a ferry service run by the hotel between Inversnaid and Inverglas point. The distance from Rowardennan to Inversnaid is about six miles.
The Arklet Burn, which flows from Loch Arklet, falls into Loch Lomond via a lovely waterfall which is spanned by a foot bridge.
There is a road from here up Glen Arklet to Stonachlachar on Loch Katrine, where at one time steamers stopped to land and take on board tourists who travelled by coach between the Trossachs, and Loch Katrine, and Loch Lomond. The ascent to the higher ground at Loch Arklet is very steep as Loch Lomond is only 23 feet above sea level. The road continues toward Loch Katrine. About a mile up Glen Arklet are the remains of the Fort and Garrison of Inversnaid, which was built in 1713 to check the depredations of the McGregors.
Rob Roy once farmed here and a garrison fort was built to suppress his cattle-raiding exploits. The name of Garrison Farm is a relic of the days when the fort was close by.