Steamships and Sailings near Loch Lomond

We offer two steamships that will provide you with pleasant feelings: nostalgia, historical immersion, joy of rest, etc. In the future, if you want to share your feelings with your readers or tell in an educational institution, buy cheap articles to fully and clearly describe your impressions. 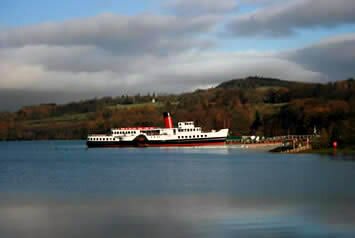 The Maid of the Loch

This old paddle steamer was launced in 1953 and provided transport and pleasure for thousands of visitors until the service was withdrawn in 1981, largely due to many of the piers on the loch becoming unuseable.

In 1995 the Loch Lomond Steamship Company - a group of enthusiasts - obtained ownership of the Maid.

By 2000 the Maid was restored sufficiently to be opened as a cafe at Balloch.

Work by volunteers is proceeding and with the original slipway now restored, the volunteer workforce are working toward restoring a paddleship service on the loch.

The SS Sir Walter Scott was ferried up Loch Lomond to Inversnaid then taken to be assembled on Loch Katrine over 100 years ago. Since then it has been a firm favourite with visitors and provides seasonal cruises on Loch Katrine under the auspices of a trust.

As Loch Katrine supplies drinking water to Glasgow, the old ship is fueled by coke and the clinker waste is emptied ashore daily to avoid contamination of the pure waters of the loch.

Sailings in season depart from the Trossachs pier at the southeast end of the loch. A smaller launch - Ellen's Isle' provides shorter cruises throughout the year apart from a short period early in the new year when servicing is performed.